Review: Detest (this thousand years I shall not weep) 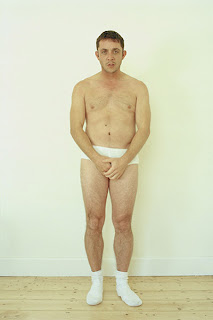 Detest (this thousand years I shall not weep) is a startling piece of theatre by writer-performer Angus Cerini, which fuses elements of his previous works, including the award-winning Puppy Love (Melbourne Fringe 2005) with true stories told by young men in the juvenile justice system. From these elements, Cerini creates a vivid and caustic whole, which is one of the first must-see productions for 2007.

The performance opens with a frank but light-hearted monologue performed by Cerini as himself (a way of engaging with the audience and developing a rapport with them that he effectively employed in Saving Henry v.5 at the Arts Centre last year). He will be naked shortly, he warns, but as a reward, tells us not only the running time of the show down to the hundredth of a second, but also promises us a bonus minute - surely a boon for the time-poor.

Once Cerini exits the stage to return in character, the tone of the piece rapidly shifts, ably assisted by a minimal but highly effective lighting design that significantly contributes to the production’s tense and volatile atmosphere. Kelly Ryall's soundtrack further adds to the mood that is created throughout the piece; particularly in a later scene referencing bands such as Kiss and Nirvana, which crystalises the importance of fantasy and escapism - not just in the stunted life of the protagonist, but for us all.

Detest (this thousand years I shall not weep) is not a comfortable piece of theatre, but it is direct, engaging and startling, and a memorable exploration of the calamitous impact of alienation and deprivation upon the young.

At the Carlton Courthouse until February 17.

Posted by richardwatts at 10:18 pm